Quotes in the news 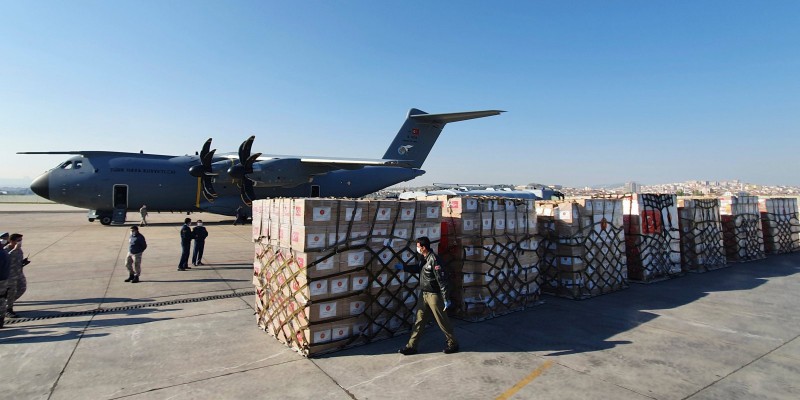 Delivering medical aid to more than 150 countries, Ankara’s humanitarian foreign policy stands out amid the pandemic while some analyses also underline the soft power aspect of the country’s approach

The coronavirus pandemic, which has radically changed our lives and the world we know, will be the first thing that comes to mind when we think about the year 2020. One of the most important elements of Turkey's foreign relations throughout the year was humanitarian diplomacy based on international aid efforts to support the common fight against the pandemic. Medical assistance delivered to every corner of the globe has been the latest manifestation of Turkey’s humanitarian foreign policy and a part of its historical tradition of generosity, experts say while some underlined its aspect of expanding the country’s soft power.

Just after the outbreak of COVID-19 in China, Turkey was one of the first countries to provide medical assistance to the Asian country. The first aid packages were delivered to China on Jan. 31, with protective overalls, 93,500 medical masks, 500 medical protective glasses and 10,000 nonsterilized pieces of equipment. Since then, Turkey has sent medical aid packages to many corners of the globe, including developed Western countries and NATO allies.

Ali Faik Demir, international relations associate professor at Galatasaray University, described Turkey's quick response to nearly all calls for help since the first day of the virus outbreak during the pandemic period as a manifestation of its humanitarian foreign policy.

Refuting claims that the aid was a foreign policy instrument or an effort for perception management, Demir said: "It is obvious that Turkey did not use the aid as a political tool. Turkey did not expect any support or different behavior from anyone in exchange for the aid. If aid is conducted with the expectation of a response, it loses its humanitarian dimension.”

On the other hand, Tarık Oğuzlu, political science and international relations professor at Antalya Bilim University, said if we mean by soft power an effort to improve a country’s global image, Turkey’s international aid initiative can be considered as such.

However, the international aid points out a more complex picture than that, he added.

“If we say that Turkey’s global image has improved thanks to the aid and the recipient countries have exhibited the behaviors that Turkey expected from them, it would be an exaggeration. The world has been witnessing soft power wars of global actors, which has been occasionally evolving into hard power. Aware of this geopolitical competition, it is important for Turkey to display a positive stance and discourse,” Oğuzlu explained.

Jana Jabbour, an expert on Turkey and the Middle East at Sciences Po Paris, also noted that under the rule of President Recep Tayyip Erdoğan, Turkey has always portrayed itself on the international scene as a humanitarian power, who contributes to the relief of people in need and who provides assistance for victims of disasters.

“The COVID-19 pandemic outbreak provided Turkey with an opportunity to materialize such discourse. By providing medical assistance to foreign countries hit by the virus, Turkey gave credibility to its rhetoric and showed concretely that it acts as a ‘soft/humanitarian power,'” she said.

Earlier in December, Erdoğan stressed the importance of international solidarity and aid during the pandemic, noting that Turkey had provided aid to some 156 countries and nine international organizations since the virus emerged in China about a year ago.

This September, speaking on the United Nations General Assembly's 75th anniversary, Erdoğan also said: "As the most generous aid donor country, in terms of the ratio of Turkish assistance to its (Gross Domestic Product) GDP, we tried to alleviate the problems caused by the pandemic with our available means."

Turkey will continue to implement an entrepreneurial and humanitarian foreign policy in the field and at the table in 2021, Foreign Minister Mevlüt Çavuşoğlu also said last month during a presentation on the ministry's budget and structure as well as foreign policy goals and priorities at the Plan and Budget Commission of Parliament.

Demir explained the concept of Turkey's humanitarian foreign policy as a continuation of an established understanding and application since the period of the Ottoman Empire.

"A hand seeking help has never been left empty. The republic, despite dealing with many challenges since its first years, has always tried to help and spread peace. Some examples during World War II are like lessons of humanitarian diplomacy to the world. What Turkey did during the Korean War is still remembered today. Turkey has become one of the first countries to reach out to anywhere dealing with any difficulty or disaster,” he said, adding that Turkey has carried this tradition of support and assistance to the international front in the recent period.

In another comment on the policy concept, Oğuzlu said that the country is giving selflessly without any expectations of short-term gains.

“The political aim is to create a positive perception and image of the country in the mid- or long-term and improve political and economic relations accordingly. Whether this impact can be achieved is hard to tell right now. Turkey aims to conduct this foreign policy concept based on humanitarianism and it is an important and necessary initiative to create a positive perception abroad."

Spain and Italy were the first recipients of medical aid packages delivered by Turkish military aircraft on April 1, as announced by the Defense Ministry.

NATO's secretary-general praised Turkey for sending medical aid to Italy and Spain, the worst hit in Europe by the coronavirus pandemic at the time.

On April 10, the United Kingdom became the next stop of Turkish medical aid to the NATO allies.

In a letter sent to Prime Minister Boris Johnson, Erdoğan underlined the cooperation and strong ties with the “friendly” and “ally” U.K. describing the medical aid as the latest manifestation of solidarity.

The United States was another country that received Turkey’s medical aid packages on April 28. U.S. Ambassador to Ankara David Satterfield thanked the country in the name of the U.S. government for the “generous donation."

Regarding Turkey's medical assistance to the West, Demir said Ankara never discriminated in the selection of countries to help and responded to the demands from the West as it did to other parts of the world.

"The West has clearly seen and experienced this approach coming from the Turkish state tradition still continues today. After the aid, different analyses were made both in Turkey and Western countries. Its reason, aim and method were discussed in different debates. It is pretty normal. Some firsts seem hard to understand or suspicious at the first glance. Despite all these misunderstandings, biases and negative interpretations, these humanitarian sharings will be good and efficient examples for living together and creating joint policies against problems during the period after the pandemic,” he said.

On the other hand, Oğuzlu said that one aspect of the help was to send a message that Turkey can handle its own coronavirus crisis self-sufficiently and even help other countries in crisis.

"However, it was a period when almost all the global actors helped each other based on global solidarity. Because everyone should have been healed for a total recovery. We can call them good gestures to improve relations," he noted, underlining the importance of normalizing relations with the West.

Jabbour underlined Turkey has proven that when it comes to humanitarian issues, it acts ethically based on a people-centered approach, and relegates political considerations by offering medical aid to European countries despite the existence of political disputes and tensions between Ankara and some European states.

“In a sense, by offering aid to the West, Turkey proved that it is a genuine humanitarian power that provides unconditional aid and assistance, regardless of considerations of race, religion, gender or politics,” she explained.